After taking a break from helping my sister move into her new apartment this past weekend, I took a breather and drew some sketches of my toothless dog, Glory, who was also helping us move in.  Her humorous face inspired me to do a series of different expressions: 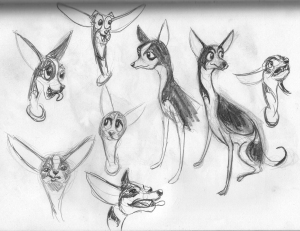 Concept sketches of Glory from funny photos of Glory that I took with my IPod.

Later when I got home, I came up with a great idea to create a parody of a scene from the movie, “Step Brothers” where they talk about the weeklong television special on the Discovery Channel, “Shark Week”. Since the longrunning series just ended its annual run last week, I decided to whip up some “Shark Week”-inspired illustrations.

Here is the scene from “Step Brothers” I referenced in my illustration where the two characters Brennan (Will Ferrell) and Dale (John C. Reilly) talk about “Shark Week”:

I started the process out by gathering a collection of reference pictures of sharks to get an idea of what shape I was going after. 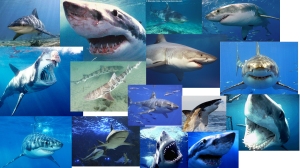 Shark references I used for designing my shark characters.

Then I drew a few studies to better understand their body shapes.

Shark studies I drew before moving onto shark characters.

Finally, I was able to began the parody.  I’m still developing this drawing. Stay tuned for the next Sketchbook Sundays installment where I will post the final version.

Sharks portraying the characters Dale and Brennan from the movie “Step Brothers” in the scene where they talk about Shark Week on TV.